Without a doubt the Panton Chair is Verner Panton's best known and perhaps most significant design. Its form, which is as unusual as it is striking, and the innovations in production technology which are related to this piece of furniture have made it an icon of chair design in the twentieth century.

Panton seems to have been experimenting with the idea of a cantilever chair made out of a single section of material as early as 1956, on the occasion of a furniture competition by the firm of WK-Möbel. There are sketches from 1958/59 which already clearly prefigure the Panton Chair. A short time later Panton had a full scale model of his chair concept made from polystyrene which was not suitable for sitting on but would help him find a manufacturer. Today this model, which is often incorrectly described as a prototype, is part of the collection of the Vitra Design Museum and shows significant differences to the later Panton Chair. In the early Sixties Panton came into contact with Willi Fehlbaum, the managing director of Vitra at the time, who indicated his readiness to develop the chair to the series production stage, Panton moved with his family to Basle. However, it was not until the years between 1965 and 1967 that the development work on the chair was driven forward intensively.
In August 1967 the Panton Chair was presented to the public for the first time. Since then the chair has been produced in four different versions from four different types of plastic and with the aid of different types of production technology.
There were both financial and aesthetic reasons for the change in materials. All versions were developed in close cooperation between the manufacturer and Verner Panton.

The production history of the Panton Chair is as follows:

1971-1979
the third series model made of coloured thermoplastic polystyrene (Luran S). The chairs made of this material can be identified by the ridges below the bend between the seating area and the base.
Manufacturer: Vitra; in the USA until 1975 Herman Miller

1983 to present day
second version of the chair made of painted polyurethane rigid foam. This series can be identified by Panton's signature on the base.
Manufacturer: 1983-1990 Horn on behalf of the WK Group; since 1990 Vitra; since 1999 this model has been marketed under the name Panton Chair Classic.

2005 to present day
Panton Junior made of coloured polypropylene (a smaller version of the Panton Chair made to scale for children from the age of three).
Manufacturer: Vitra 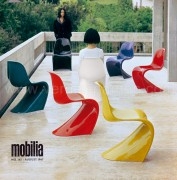 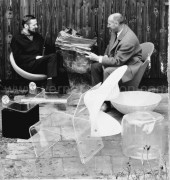 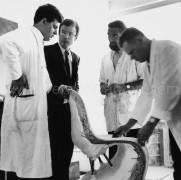 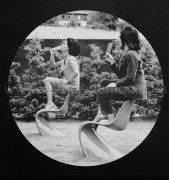 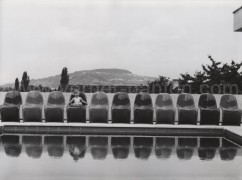 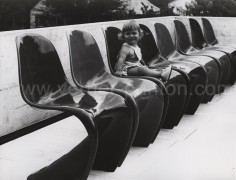 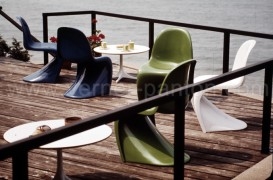 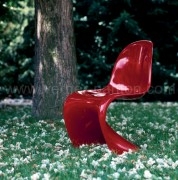 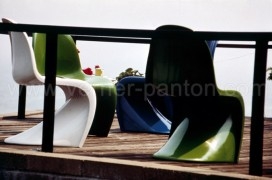 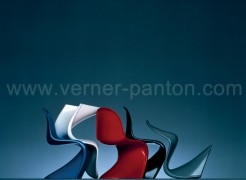 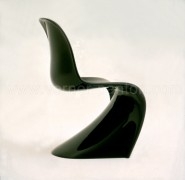 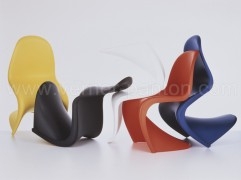 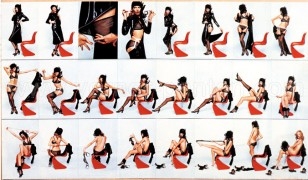 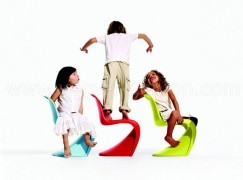 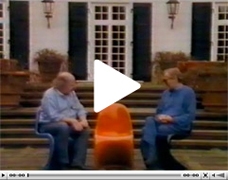 Crosslinks:
Panton-Chair in the Varna restaurant
The architectural commission at the Varna restaurant in Arhus was for the interior design. Verner Panton took his inspiration ....
Panton Chair in production
Because of technical progress in plastics processing, the Panton Chair has been through a number of production phases since its original launch. The last version...
Panton Chair Classic in production
In the early sixties, the Danish Designer Verner Panton together with the Vitra Development Team, realised an idea which had preoccupied him for many years...
Panton Junior in production
The Panton Chair has always been a favourite of children. Kids like its bright, cheerful colours, the tactile smoothness of its curved shape, and the fact that you can not only climb on it, but also use it to make great caves and hiding places...