On the occasion of the Olympic Games in Atlanta the Swatch Art Clock Tower was set up in the Olympic Museum in Lausanne in 1996. The idea for this tower came from the Italian designer Mendini and the firm of Swatch, and involved designing a Swatch Art Clock Tower for various cities. Verner Panton’s tower was one of 12 designs which should have been exhibited in Atlanta. However, as this did not happen it was erected in Lausanne and later took its place in the museum in Lausanne with two levels reduced in size.  It consists of 63 coloured rings and a large Swatch watch at the centre. 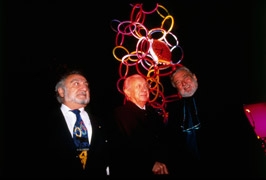